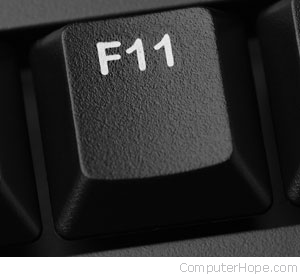 The F11 key is a function key found at the top of almost all computer keyboards. The key is often used to Enter and exit fullscreen mode in all modern Internet browsers. As mentioned below, F11 also has other uses depending on the computer and program.

If the FnLk (function lock) is enabled, the keyboard acts as if the Fn key is being pressed until it is unlocked.

If the F11 key is not working on the keyboard, see: Some keys on my computer keyboard aren't working.

The following list is all the locations where the F11 key can be used with information about its use.

With macOS 10.4 or later, F11 hides all open windows and shows the desktop.

Enter and exit fullscreen mode in all modern Internet browsers.

Creates a chart from selected data in Microsoft Excel.

The secondary function of F11

The default F11 key primary function on Apple keyboards is to turn down the audio. Pressing fn+F11 for the secondary function is F11.

On Cooler Master desktop keyboards, the F4 secondary function is one of the following options depending on the model.

The F11 key secondary function on Dell laptop keyboards is to mute and unmute the volume.

On Hewlett-Packard laptop keyboards with two right arrows pointing to a line on the F11 key, the secondary F11 function fast forwards or goes to the next track in supported media players.

On the Microsoft Surface laptops, the F11 key secondary function is the PgUp key.

Where is the F11 key on my smartphone or tablet?

Smartphones and tablets don't have keyboards like you'd find on a desktop and laptop and therefore don't have an F11 key.

Below are links to related keyboard shortcuts and individual key pages.